Charon is a game-developer of RPG games, using the RPG Maker for their games. Charon has overall used Pixel Art and sprites to develop their games and as for the gameplay; it's mostly revolved around stories rather than game play. For Charon's games, most of the endings involve 'bad endings' and at least one 'good ending'. Although the 'good endings' are named 'true endings' and rather the endings are in no particular way good all the time.

Here is a list of games Charon has developed.

CHARON uses a mixture of horror and Yandere troupe in their games and a style of visual novel rather than interactive gameplay. In most of their games, CHARON leaves small puzzles such as interacting with items or people which could result to an ending. However, most gameplay is short and often results to some true endings and the others being bad endings. The player would have to complete the true ending in order to finish the game. By downloading it, a set of instructions is usually given and gives advice about endings, without giving detailed information about the ending.

The characters CHARON uses is usually with the protagonist being male and their name ending with -rou. The side characters are often female and related to Yandere or Yangire tropes. Most endings result in the male character's death. As for the game play, there is a save station called 'bunny' that has been used through all of CHARON's games to serve as a saving point. Around 15 files are available to save data.

Before the game begins, a brief description is given 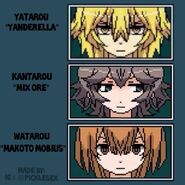 An edit of the full profile of some of CHARON's characters

Tropes common to Charon's works include:

Community content is available under CC-BY-SA unless otherwise noted.
Advertisement